Some statistical numbers from the 4 sections we cycled in Indonesia on  7 different islands and Timor-Leste. 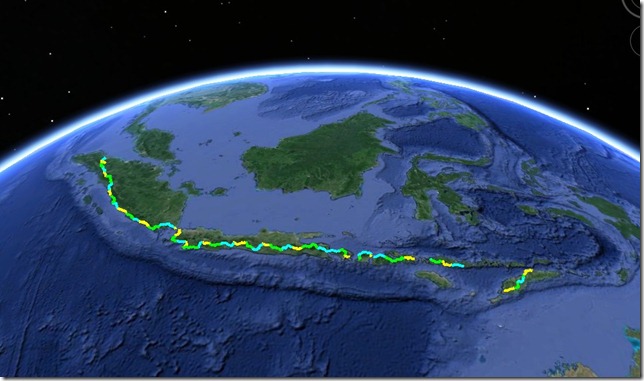 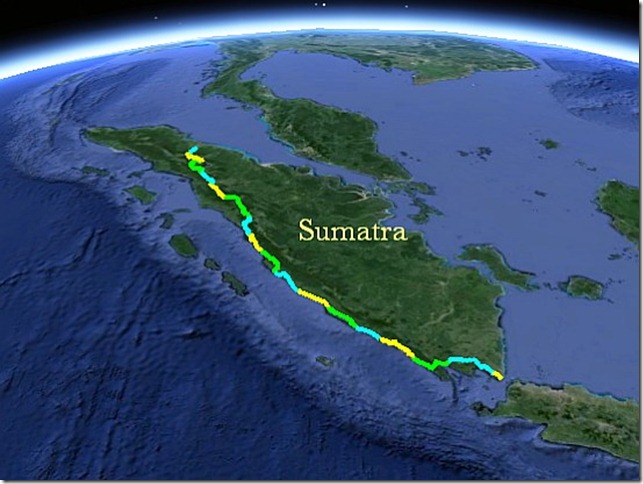 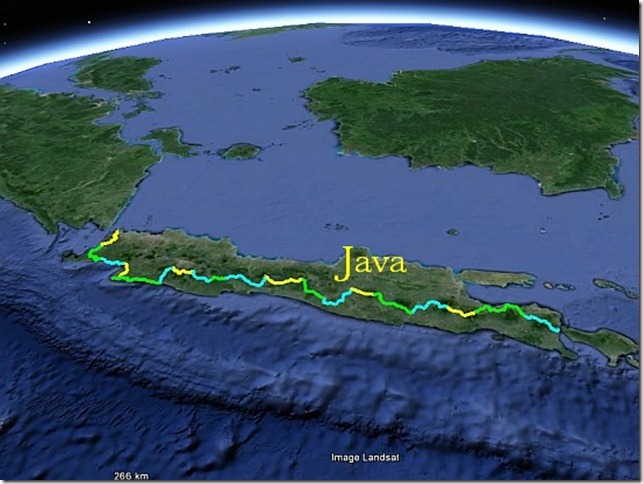 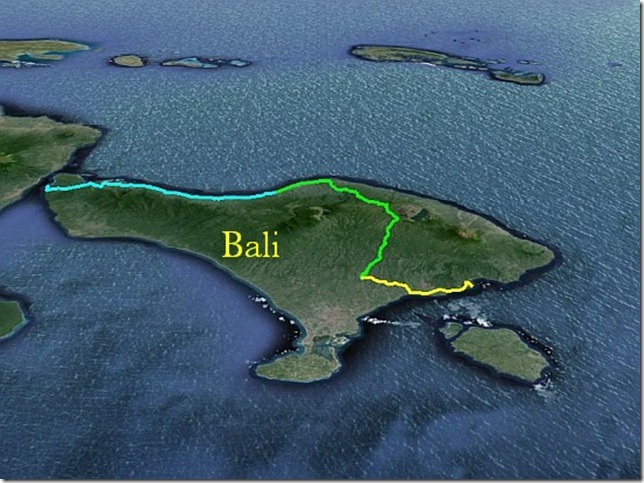 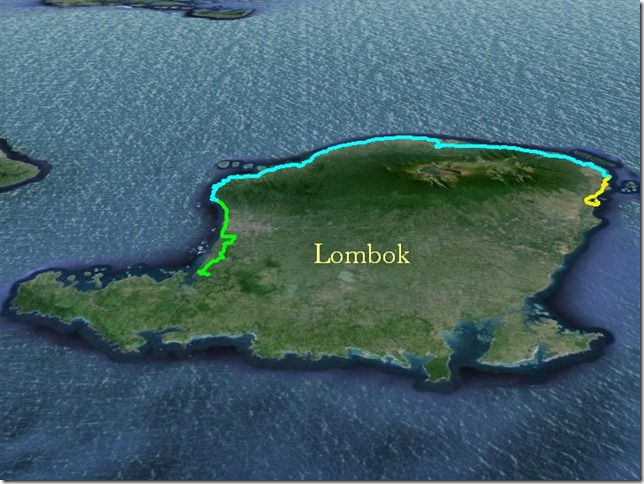 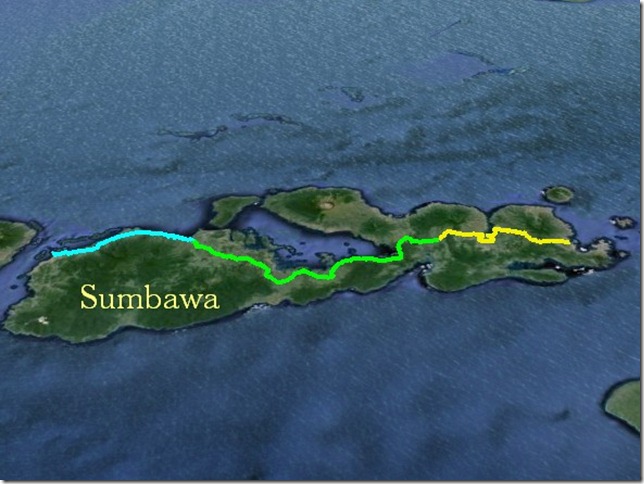 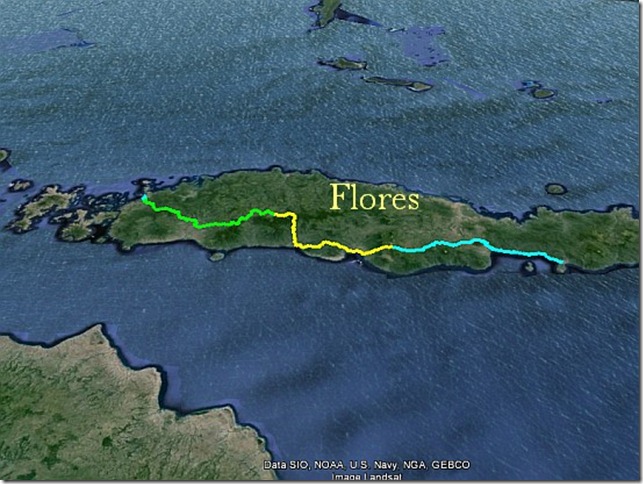 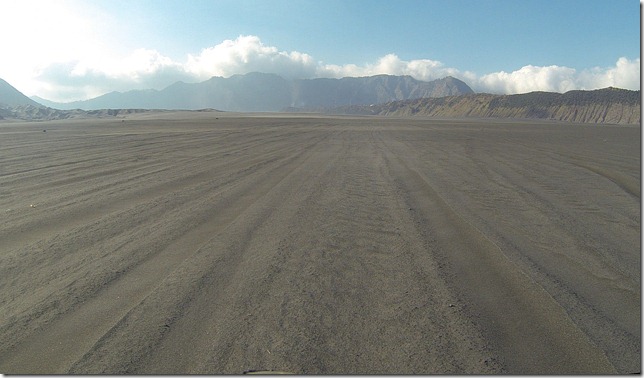 Today’s mountain peeks that we had to overrun where exceptional steep and the tips extremely sharp. Besides the need to force the last bit of energy into the legs to turn the cranks and keep on moving, it was also a battle for the tires. Obviously too much, even for an ‘undestroyable’ Schwalbe. Usually I shoulder my bike and lift it over the top, to protect it from tire damages caused by sharp tips. However, today I forgot to get off my 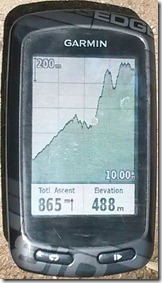 bike on one of the peeks and got my rear tire completely stabbed, down to the fabric. Luckily I had the extra anti-flat plastic layer inside between tire wall and tube, thus I didn’t suffer a puncture and could continue the ride to camp. 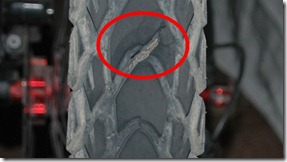 After dinner I had to perform an emergency repair, moved my front tire to the rear wheel and mounted the Supreme (which is for smooth tar) to the front. Now I need to hunt for a new offroad tire to replace the damaged one.

Today I wrote my Tour d’ Afrique history: I arrived as first rider in the Camp, which means that I won the stage. It was not only historical because I never compete with the racers, but take my time for photos and interactions with locals, but also because it was the hardest stage ever, due to the last minute change of the route at lunch. Actually I was so early, not even the usual welcome committee (riders who did not cycle and staff members) was around to cheer me in. All were still on the 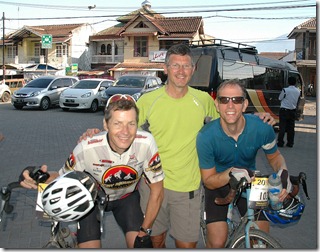 road, in the cars. Only Bob – who already went ahead to this place 3 days ago, as he recovers from an injury that does not allow him to cycle – was here to witness this historical day. I was already showered and in fresh clothes, when the runner-ups – Chris and Paul – arrived, partially exhausted and still in sweat. They fair congratulated me for my achievement and posed 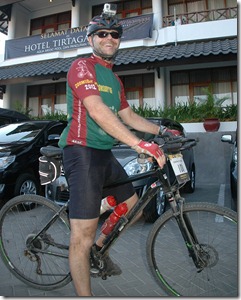 with me for a winner photo. Eric, who arrived 4th, seeing me in civil clothes and best mood, couldn’t actually believe that I was already at camp, ahead of him. Very concerned he asked me ‘are you o.k.?’ thinking I had arrived in the sweeping van, and DNF (did not finish) the stage because I had given up or an accident.  So I had to honestly swear to him, that I really cycled this hard stage into the camp and did not cheat. I was probably the first person who ever crossed this pass on a bicycle.

This story wouldn’t be complete, without some background information.

As a matter of the routing change from lunch, the 3 ‘racers’ Chris, Paul & Eric’ were accidentally 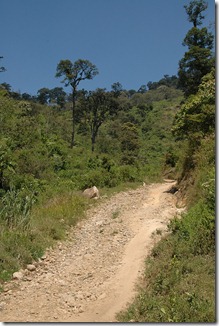 released into the wrong (original) direction. By the time this was recognized they were already 10 km further downhill. Now each of them had to hitch a taxi, that brought them back up to the lunch stop. – It must have been a funny picture, 3 cabs with someone sitting inside, arm out of the window and pushing a bicycle outside the car, as the taxis were not equipped or big enough to carry bicycles. – Once the 3 were back to lunch they got on the right track, but Chris and Paul missed the first turn after 1 km (I did not remove the flagging!) and continued uphill into a dead end road, loosing more time. Eric did not get lost, but stayed with Brett, who had a hard day, on the brutal climb. I was still very strong on the steep uphill, although I had to walk a large part of the 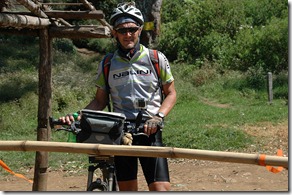 track with my heavy bicycle. I still took my time to document the roughness of this stretch, took a summit photo at the security post, and wired back to Andreas, about the ‘none-rideable’ climb, to inform the other riders, what to expect on the new route. Some turned around to get on the van, others did not attempt to go into the ‘wall’. Later everyone, who made it through the climb, committed 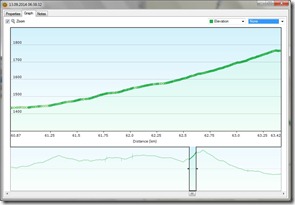 that they had to walk their bicycles most of the steep uphills, as the grade or underground did not allow to stay on the bike. The conditions on the 3 km / 350 m climb with sections as steep as 15% – 22% on loose gravel and boulders or corrugated soil couldn’t be managed without professional skill or extra risk taking

This (partially) explains, why I was all of a sudden ahead of the racer group and never been caught again

Welcome to my Trans-Oceania Tour Blog!

I am busy constructing this site, to be ready when the tour begins in August 2014. 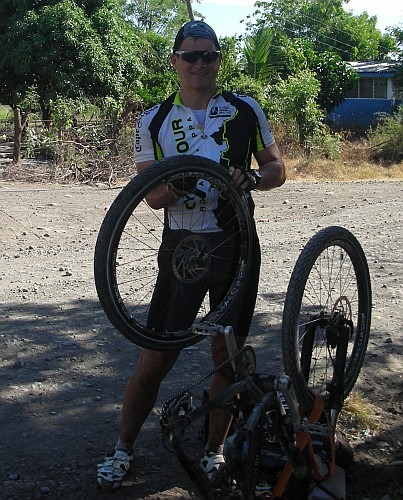