Cristiano must have gotten up very early this morning. He must be on a new mission ‘if the cyclists think that cycling into a rest day camp is a walk in the park, he can show them different!’ 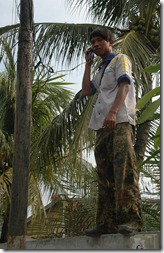 No way to allow us to run early into the luxury of the rest day hotel. So he secretly changed the track.  After the already 5 tough and long cycling days he thought he needed to top the difficulty of the last stage, again. He must have spies around, to watch and listen us, gaining knowledge about what we think about the grade of the difficulties so far. Through them he found out that we are still the happiest cyclists, even after all the burdens that he put on us so far. In the photo on the right you can see one of his NSA-trained agents, whom I got on the spot, when he tapped the phone line outside of our hotel. Knowing this, we must be very careful, what we say and post in our blogs, to not give him a wrong impression about his scouted trails.

Back to the last cycling day (stage 23), The instructions on the board read ‘bad gravel’. However it wasn’t said, that the first obstacle, a ‘road with bad gravel’ shouldn’t actually be named a ‘road’, but rather ‘dry and rough riverbed’. 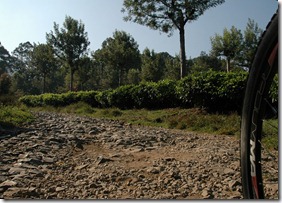 I think Cristiano and his helpers got up really early in the morning to stop and redirect the waters of the white river running down the hill, such that we can cycle up the now dried and rocky riverbed. Huge boulders and loose gravel for about 10 km plastered our climb into the surrounding tea & cinchona fields. The landscape was again stunning 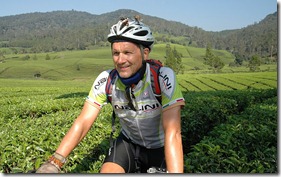 and the ride ‘pure joy’ for me on my ‘Cadillac’. I was glad to share my hard earned happiness with the hard working tea picker ladies in the fields. For other riders this early passage was already a torture, with more to come later that day. It already took me more than 4 hours to get to the lunch stop, at about 60 km, which meant again a long riding day, as there was 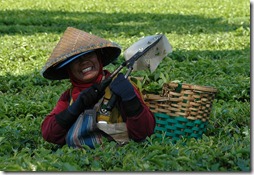 to come a 2nd huge climb thereafter. The lunch was again a treat. This time we got grapes, a rare and expensive fruit in this area, and fresh mangoes. To our surprise we were told by Andreas and Chelsea, that the track was changed from the original route. We will bypass the busy roads and cut short a part of the afternoon climb. Was it for good or bad? Nobody knew, but 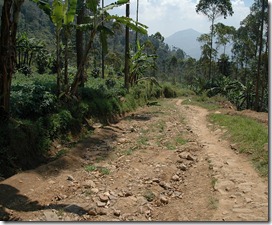 Cristiano, who had silently scouted out an alternate route in the early morning. He actually hired a local guy on a motorcycle who rocketed him up the hill, to flag the ‘forbidden’ trail for us. Forbidden in a sense, that it was not an official road, but a privately owned trail by Chevron, who operated a power plant on the other side of the hill, for which he had to ask for permission to trespass their premises. This trail could only be walked or mastered by a strong  motorcycle. No way for a car or 4×4 to drive it. This is where he sent us. A note on the white board said: ‘at 64 km Crazy Downhill, WALK! ’ – For our own safety, because there was no way to rescue us, other than by helicopter, if we had a bad fall in this remote area. However, no word about the ‘Enjoy a long afternoon hike and WALK the Wall! I tend to call the upper section of the 3 km climb ‘The Wall’, 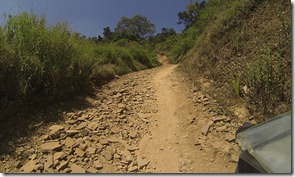 at some parts so steep, that you could only walk or shoulder your bicycle to advance forward, step by step, taking care not to tumble and roll over. Although I managed good parts cycling and reducing the walks to the necessary, it took me almost 1 hour to get to the top.

btw: When I was reaching the top, I saw the last of Cristiano’s ‘Sherpa helpers’, removing the hooks and safety ropes, that secured him on his passage

The downhill on the other side of the mountain was again pure joy and a well deserved reward, for those who made it to the top. Half way down the downhill I run into Cristiano and one of our vans, who were on his way back up to the top. He was really worried about us and our whereabouts, as nobody has been coming so far. Seeing me an avalanche of rocks must have fallen from him, recognizing that it was doable and I did not directly jump on him yelling loud and with threats of group punishments when we all are in camp.

.  I continued the downhill knowing, that I would win this stage, as I was the first to master this very demanding and challenging passage and there was no way to pass me on the final downhill of this very exciting cycling day.

Later the evening Henry admitted that he wouldn’t have attempted the bypass, if I hadn’t called and described the conditions from the top. But now he was challenged to prove to himself that I couldn’t scare  him enough from doing the spectacular ‘Bike Walk’.

first stage after the rest day is hopefully reset again to ‘novice’, otherwise it could mean that Cristiano must send us to the Moon on Monday, to set a new raised difficulty level.

Astonishing, how skillful the locals run their old motorcycles on such 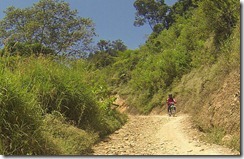 a trail, sometimes 3 people on a bike plus extra load, like a sack of rice or a bird cage. But even they had to walk their bike on certain sections, because it was not safe to stay on the seat. Imagine this to ride in the rainy season?!

A big THANK YOU! Cristiano and Team, for making these rides so extremely extraordinary, never boring and still enjoyable for some, but at least memorable for all of us.