After 6 years of less extended cycling away from home, I felt a bit of itching in my legs again, and asked myself ‘What could I do to get some relief?‘ My big Tour d’Afrique cycling trip 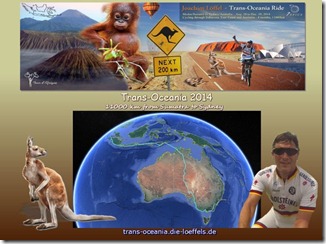 from Cairo to Cape Town in 2008 and the Doomsday Ride  two years ago in Central America called for another sister to add to the list of long distance cycling tours. When I heard about a trip in south-east Asia and Australia I was immediate in flame with the thought that this should be the next challenge. And now it realizes. On August 18th I am back into a big adventure, aiming to cycle about 11000 km in 4 months through southern Indonesia, East Timor and Australia. Me and 13 other ‘crazy’ cyclists from different countries are on the roads to cycle the Trans-Oceania Tour. On 93 cycling days the route leads us from Medan, in the northern part of Sumatra, through 8 Indonesian islands and the Australian Outback, and Great Ocean Road to the destination city of Sydney.

Maybe the ferry crossings between the islands will give me a little rest, unless I  am recruited to drive the ship’s propeller with my bicycle

. On December 19th I will arrive at the Sydney Opera and start into a well deserved Christmas holiday ‘down under‘, before I return to Germany and office in early January 2015. Until then I am looking forward to a lot of fun and exciting riding days and finally meet with my Sydney colleagues at the end of the tour and enjoy some ice cool drinks and ‘white Xmas’.

We will start with a 10 week island hopping extravaganza across Indonesia on its main islands in the south and its “sultry kaleidoscope” of cultures and contrasts. From the jungles of Sumatra to the artistic traditions of Yogyakarta on Java, from heavenly Bali to the empty beaches of Flores the route includes several inter-island ferry rides, enabling us to immerse ourselves in the intoxicating local foods and customs and sights en route. After a short stay in East Timor we will fly from Dili to Darwin in the Australian north to continue to pedal across the Outback and along The Great Ocean Road, via Alice Springs and the magnificent Uluru (Ayers Rock), Adelaide (and its vineyards) and Melbourne, before finishing at the iconic Sydney Opera House a few days before Christmas. 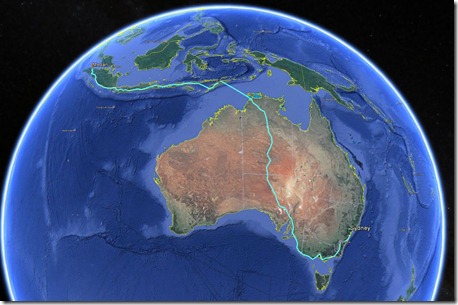 The tour is broken down into 8 sections, where participants can join in our leave the tour, if not able to do it in full.