A healthy start into the 3rd day after my ‘breakdown’ with a healthy breakfast in ‘Garden Eden’  and a first sign of appetite. After 3 days without eating my stomach is as empty as my wallet after paying the hospital, taxi and doctor’s bills and it cries for food.

Last night was an almost perfect night of sleep. Only a few short wakeups, no severe coughing, stomach still rumbling, but no liquid poop, no need for midnight laundry of pants and sheets!

Getting a faint sign of color back into my face and the beloved ‘I am all fine smile’. Soon to meet the troop again who is supposed to arrive later this afternoon. I bet they will envy me for having had 2 extra days here instead of more climbs, dust and gravel. 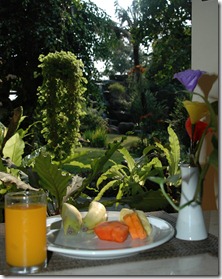 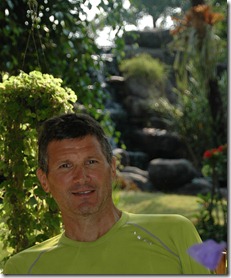 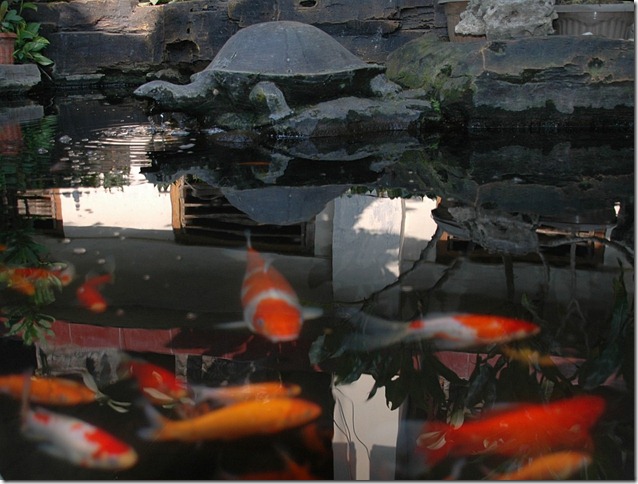 I already met Gerald again, whom I knew from a TdA rider unification meeting in Cape Town last year. He is joining the tour here for the final 3 months of our adventurous cycling expedition.

I am overwhelmed by the sheer number of friends, supporters and viewers following my blog and commenting with encouragement and heart warming words. You helped me a lot over the past 4 weeks to master every day’s challenges and never getting tired to spin the cranks on my bicycle.

With a smile from me and the always smiling Javanese tea picker ladies, I am sending a friendly ‘Selamat Siang’ from Java to all of you around the globe. 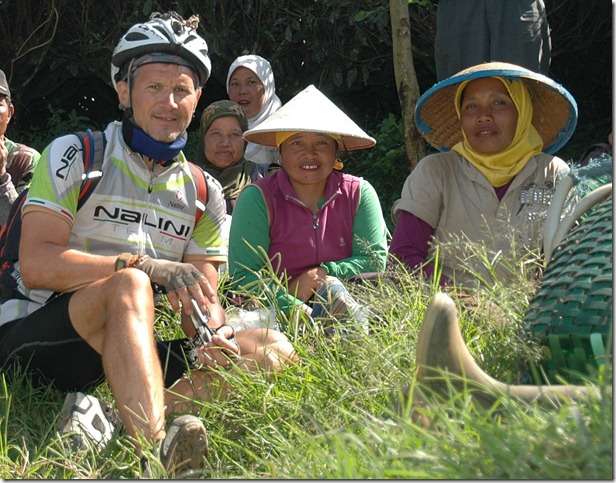 I hope you will continue to virtually travel with me for the next 3 months on this exciting tour.

Large plantations of rubber trees form the landscape of wider parts of western Java. You can recognize the harvesting finding the attached little cups to each tree and the ‘pipeline’ cut into the bark that runs the white rubber mass.  Drop by drop slowly filling the cup for a new Schwalbe MTB tire ready for the Trans-Oceania 2016.

A dangerous encounter on my way through the Java coastal region. I was just taking up speed again after a short climb, when this guy passed my way, trying to escape into the bushes and keeping John and Colin in a respectful distance … 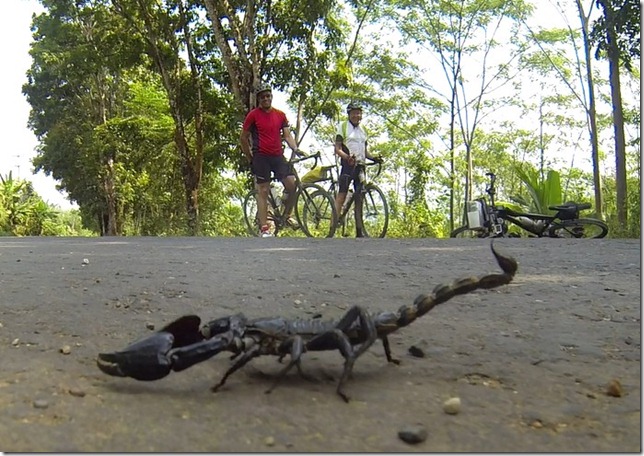 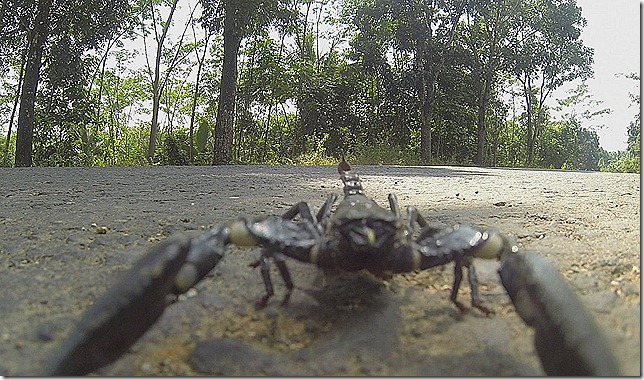 I stopped at a big ceremony along the village road. I think the whole village was around and celebrating a wedding. Before I could really 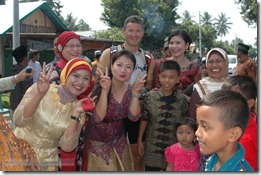 recognize what it actually was, I was surrounded by kids, men & women. Old and young wanted to take a photo with me. I guess, meanwhile I am one of the most ‘recorded’ foreigner in this country.  However, I always get a chance to take my photos, too. It is still no 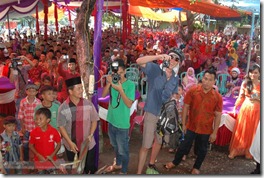 problem, to just hand out my big Nikon DLR to a local, quickly explain how to operate, and there you are. No fear that my camera or anything will disappear. Imagine this in some parts of Africa or Europe … no chance to ‘dive’ into a crowd like this, without being pick-pocket.

After the photo shootings I was asked into the tent and on stage to greet the young couple. They really looked young, probably much younger as they are. Andreas, today’s sweep, 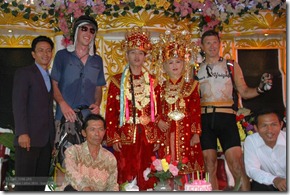 has already arrived and happily joined the party. We were treated with cake and drinks and many warm welcomes. We couldn’t leave without being brought back on stage and dance to the excitement of the other guests. 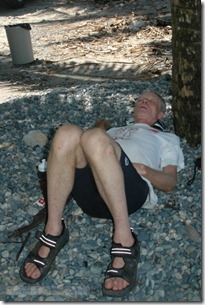 ust 60 km, almost flat, to lunch with only 15 more kilometers to the next camp in Bintuhan. Some even decided to extend the breakfast in Manna for longer, as time was no concern today.  After lunch obviously the lonesome beach, monotone sound of the breaking waves, the heat and the food took its toll and almost everyone fell asleep right on spot, at arbitrary and partially uncomfortable places. The next days will be much harder and longer, thus a random nap in the afternoon is not a bad idea. 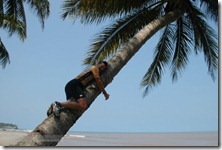 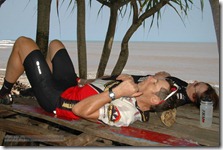 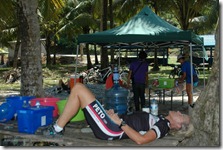 Today I was stopped by two girls who followed me on their motor scooter for quite a while. When they passed me the first time, they gave me a bright smile and a ‘Hello Mister’ and headed away, to soon slow down and let me pass again. I could hear them giggle. Next thing I noticed them approaching me again from the back, staying behind for a while, before they passed and slowed down again. This repeated several times, until they finally stopped behind the next corner and waited for me, waving me to stop, too, which I did. 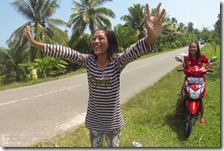 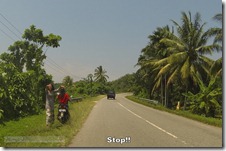 Then I heard ‘Oh my God’, ‘Oh my God’ and ‘Photo’. Several OMGs later, the smiling faces were ‘iPhoned’ for a happy girl and a happier ‘Alter Sack’. 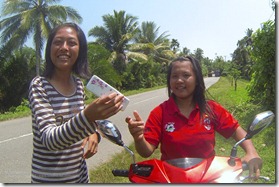 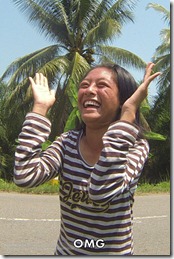 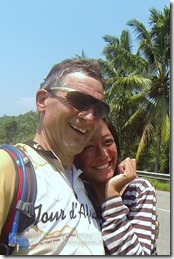 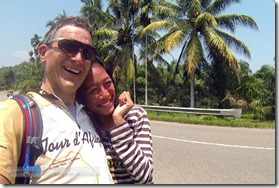 Who said there are no thieves on Sumatra? So far I felt very safe to drop my bicycle anywhere and anytime to take photos, 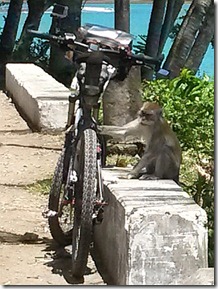 without fear to miss something by the time I return. However this seems to have changed now. Arriving at the sea the rules are different: “Watch your belongings, when there are ‘pirates’ around!”

This little gangster tries to steal one of my water bottles from the bike. He was pulling hard, but couldn’t figure out how to outsmart the bottle holder system.

The name on the whiteboard sounded very inviting. ‘Bali Hotel’ –what an  exotic name for what appeared after a 156 km ride. Maybe I am a bid spoilt by the standards of the first class lodges we had for the past two stages? Am I? No, with my travel experiences it takes a lot to kick me out of my boots!

I doubt that the Bali Authorities know about, how there name is being misused. The hotel is a loud, rundown complex in the center of Tarutang. It has basic and standard rooms. I share a basic room with Eric. The room is 4x4m² with a window to the entertainment corner. Outside a live band is currently playing … 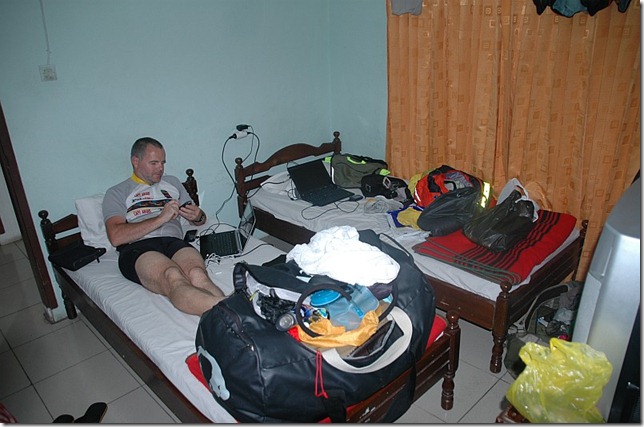 I dumped all my eatables, that were not sealed …

Note, this is by no means criticism at TdA. They do an awful good job, to find big enough places to sleep all of us, in such remote locations, but there are things beyond their responsibility.