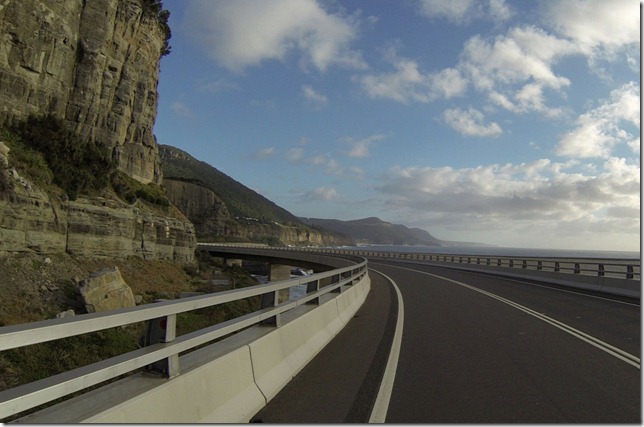 It was a fantastic ride in the morning, along the Great Pacific Road, partially built on pillars into the ocean, and through a very scenic Forest National Park, before descending down to the first ferry. Later the ride continued on endless bike paths 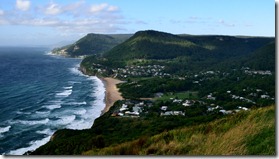 along the ocean and rivers into the city and the ferry port. We were not taken the direct and shorter route, to avoid the busy rush hour traffic on this Friday morning. On the first half of todays distance there were two short, but partially steep climbs, but very scenic in dense forest. Two ferry rides were injected to avoid highways and shorten the remaining riding distance a bit, as we wanted everybody 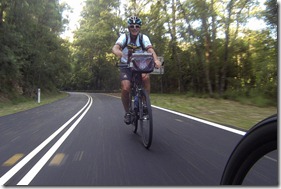 to arrive at the Opera House on a bicycle at 3pm. Eric decided to be the ‘sweep’ today. Unlike all other days of the tour, when he wanted to be first to camp, competing with all the other racers, the last day is his ‘I want to finish last’ day. However, he immediately failed his ‘sweeping’ task, when Lydia and I fell far behind him after leaving camp, without him to notice. Only when we eventually closed up at a scenic lookout, where fellow riders were taking photos, he became last again. For me it was a ‘camera day’. I went ahead on the climbs to take photos and videos of the ‘struggling’ riders and fell back again until the last in the group passed me. 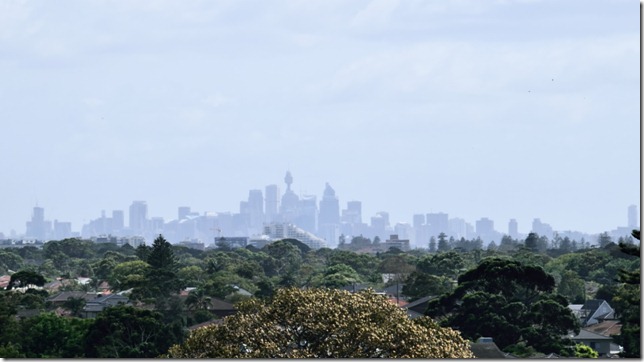 The first stunning view of the city skyline opened shortly before lunch stop. It looked so close, but was still 45km away. Chelsea was waiting in a park with a special lunch setup. No car and no canopy anymore, just she, her bicycle and a few plastic containers and plates with food and sweets. I was leading the final 45 kilometer 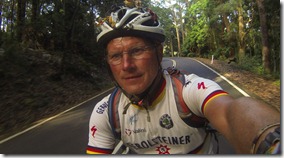 to the port, from where we will have to take the ferry to the Circular Quay, right at the Opera House. I ‘challenged’ my group (Terrie, Bryon, Matthew and Lydia) twice, when ‘intentionally’ taking a wrong turn, just to see, if they are not sleeping or daydreaming behind me. They immediate corrected me proofing their attention and trust in me. The bike path was quite ‘tricky’ and led us in a big loop around the busy city center. We arrived at the ferry at about 1am and soon enjoyed  the long ferry ride in the inner harbor. Happiness increased, when the first view of 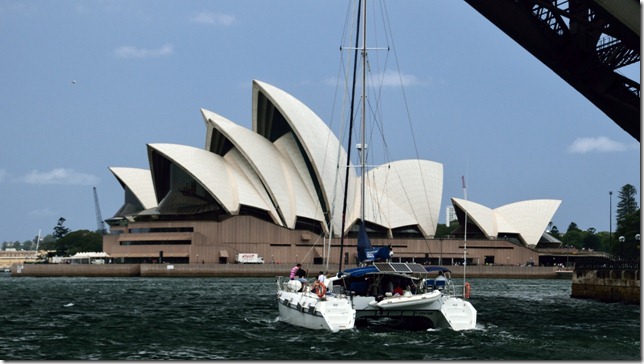 the Harbour Bridge was visible and revealed the unique shape of the Opera House in the back. A few more turns and landings, before we finally reached the Quay and departed the ferry, to PUSH our bikes the final 700m to the Opera – no I understand, why Australians call a bicycle ‘push bike’. At the Opera we were greeted with bright sunshine. 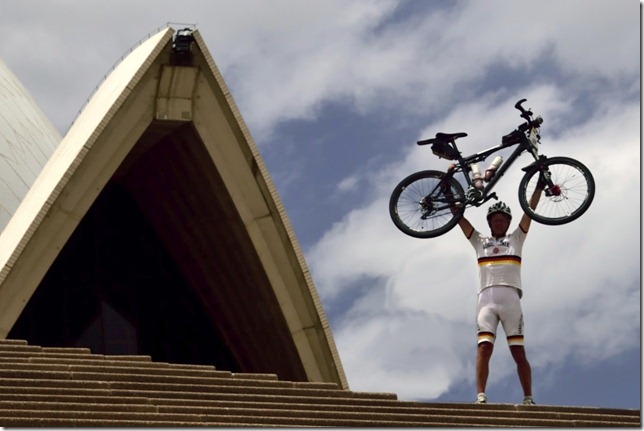 Here we are, the end of the tour! 4 months of cycling for the full tour riders ended here; or a bit less cycling, for those who joined the tour at later stage. With still plenty of 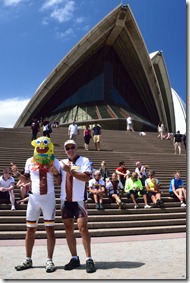 time the few of us took some quick photos and headed for a Café to refresh and prepare for the group meeting, at around 3pm, when the ‘sweep’ and the final riders are expected to arrive.  And with a bright smile, Eric swept everybody shortly after the hour onto the Opera areal. Even ‘Sponge Bob’ who disappeared after the mishap in the Bromo crater / Java made it to Sydney and was happily welcomed by the cyclists. 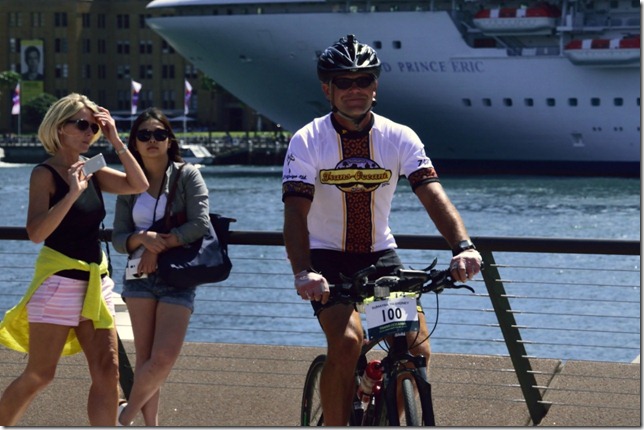 After congratulations, hugs, some tears and kisses we posed for some group photos, before everyone disappeared to our hotel to get ready for the final tour dinner, at 7pm. 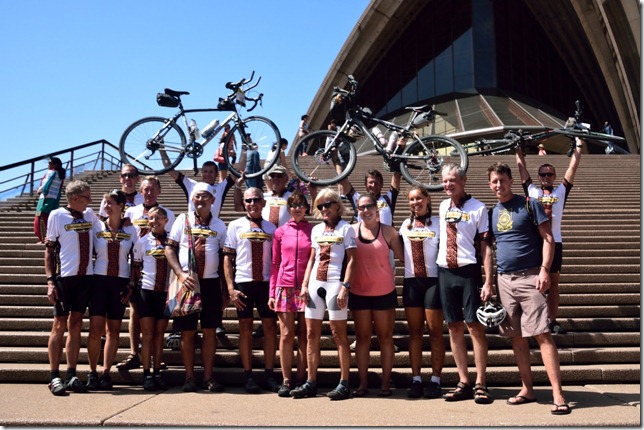 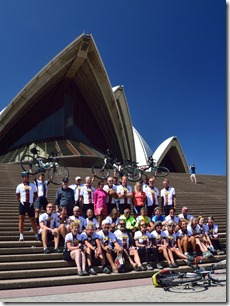 Unfortunately it was not a ‘parade’ style of arrival. Almost unrecognized we made our way from the ferry to the Opera. Only our new tour jerseys made us a bit ‘special’. No group/convoy riding into the city celebrating our trip. No tour banner, no champagne reception, no music, no local cyclists to welcome us, no press; only a very small number of relatives or friends waiting for individuals, where around, as well as our  two Australian riders, Stirling and Daryl, who rode with us in Indonesia. 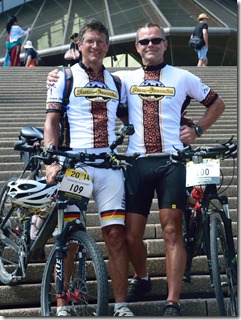 Soon, everyone will leave for home to rejoin with family and friends for the Christmas Season.

I’ll stay in Sydney and around for another 12 days to enjoy a restful and hopefully dry and warm yearend in the Southern Hemisphere’s summer time. Winter in Germany must wait for me …

Note:
The tour dinner and post tour updates, as well as more photos and videos from the tour will follow in the days to come. 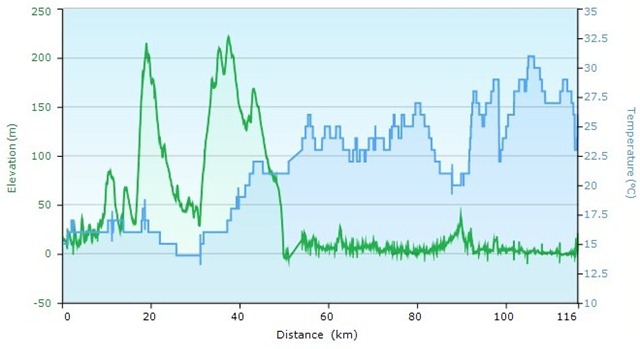 the distance includes the 17km ferry ride to the Opera