Arrived in Melbourne, the end of the Great Ocean Road section.

Can you imagine a day for me without photo stop? Today was the first day nothing attracted me to further explore and document. It did not rain, but it felt wet on this cloudy, grey morning. Even the beaches were deserted and grey in grey. Riding through industrial areas or farm fields did also not reveal new things. Thus I kept a high pace. Riding with the Garmin GPS made navigation easy. Although we did not get a track, the device always gives you an idea where the next turn will be. So I was riding very fast from point to point, even closed up with the usually fast riders, who left earlier than me and guided them to lunch, which was at 74km. I arrived first! A first of a kind. Other riders arrived soon after. I was getting cold in my wet soaked jersey and sweater, so I left lunch after a shorter break than usual. With only 34 km to go I continued with my high pace. Shortly before camp Chris closed up with me. He had left earlier, but at one point fell behind me, when he couldn’t immediately find the right turn. He finally passed me, when I had to stop at a traffic light, which he gracefully avoided. We arrived at the caravan park within a few seconds from each other. Since he immediately stopped at the reception to get a cabin and I continued straight to the camp ground, I was awarded to be the first seen to arrive at camp at that day. Only 3:58h for 106km on my MTB, a new record for riding in unknown terrain! It was just 11am, when I started to pitch my tent. Remember, just 3 days ago I had covered only 11km by 10am, however, with a lot of scenic stops and photos. The known as ‘slowest’ fast rider, was today the fastest fast rider! Maybe I had some extra boost from last nights birthday party or it was the inhaling of ‘enriched’ air riding past the big oil refineries, that gave me a real energy boost. 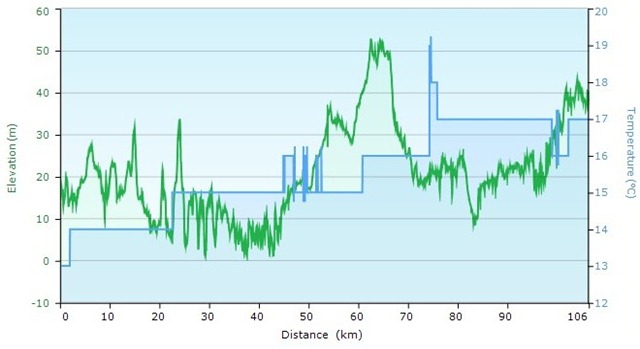