Today was an easier day. Wind still not completely favorable, but not as strong as the days before. Temperatures are also rising again. I was riding solo again; thought there might be better photo opportunities going on my own again. Going my own pace and not organizing a peloton, it was also easier for me to scan the fields for wildlife. And I was right. I saw a ‘desert crocodile’ in the morning and some ‘mad’ cows. However before arriving at the lunch stop there was not much more, in a real deserted, vast land, with almost no vegetation. But at lunch the landscape changed again. Snow white lakes appeared out of the red plains. Our lunch stop was at Lake Hart, a stunning salt lake, which invited for an extra tour on the white, flat surface. It was as if cycling on a glacier, but much warmer. With only about 50 km to go after lunch, I was leaving at last, even after the sweep. I was lucky that day. Several Emus crossed my way and I could take good photos. Another big lack appeared later and I walked a few 100m into the fields, to get closer to the edge and a better view. Before getting into Pimba I made a sad encounter of a kangaroo. When I passed it it looked as if it was hiding in the ditch, watching me, even greeting me. I turned around and could not believe my eyes. It looked like a funny setup. But then I was shocked, when I saw a slight movement. The pour animal was breathing and the head turned all of a sudden, to follow a truck, that was approaching and passing us. Then I realized that the kangaroo must  have been recently hit by a car and severely hurt, with broken and dislocated legs and probably a broken spine totally unmovable, except its head. It didn’t show pain, but was so helpless with a facial expression that asked for help or relief. It was so sad to see this, but nothing I could do. During the 4 weeks ride through the outback, we saw so many road kills, more dead than alive animals, however this was the most touching view of a kangaroo that was between life and dead.

Only 2 more days and one bush camp in the Outback before we hit the coast line of South Australia at Port Augusta. We will soon miss the quiet nights and lonesomeness of the outback. 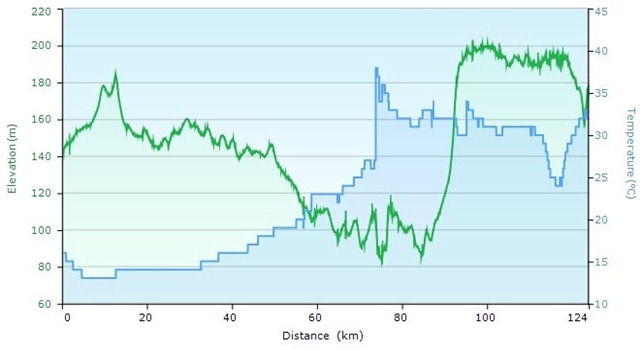