It wasn’t the expected tailwind out of Coober Pedy. In the contrary, a storm hit our campground the night before and the wind changed directions again. Everyone was busy, securing the tents and flies. The change in wind directions came along with a huge temperature drop. Compared to the previous days, the temperature was down by more than 30°C. I was riding most of the day solo again and enjoyed the first kilometers out  of Coober Pedy, with some photo stops at the mines. But soon the conditions became worse. The wind got very strong and gusty, later rain set in. Luckily I packed my raincoat the night before an got some protection. I rode with Henry and Doug, who had a slow leak and needed to pump up every 15 km. Lunch was still in the heavy wind and with wet clothes I felt real cold. Refreshed with 3 sandwiches and fruits I continued the afternoon part. The weather improved and became sunny and warmer, but still very windy until I arrived in the bush camp. I setup tent in the bushes, well protected from the cold wind. The movie was canceled as the conditions did not allow the setup the equipment and nobody would be sitting and watch in the cold. The night was clear, but cold. 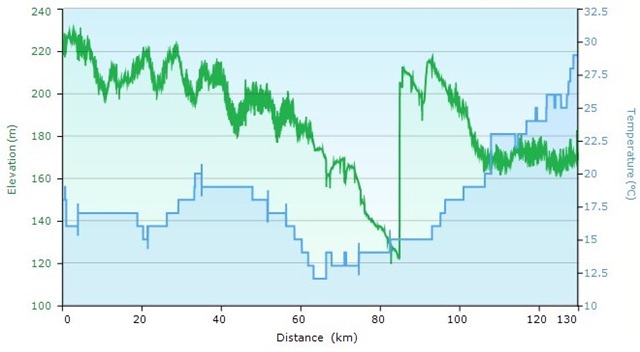