Eric is protecting his ‘starters’ 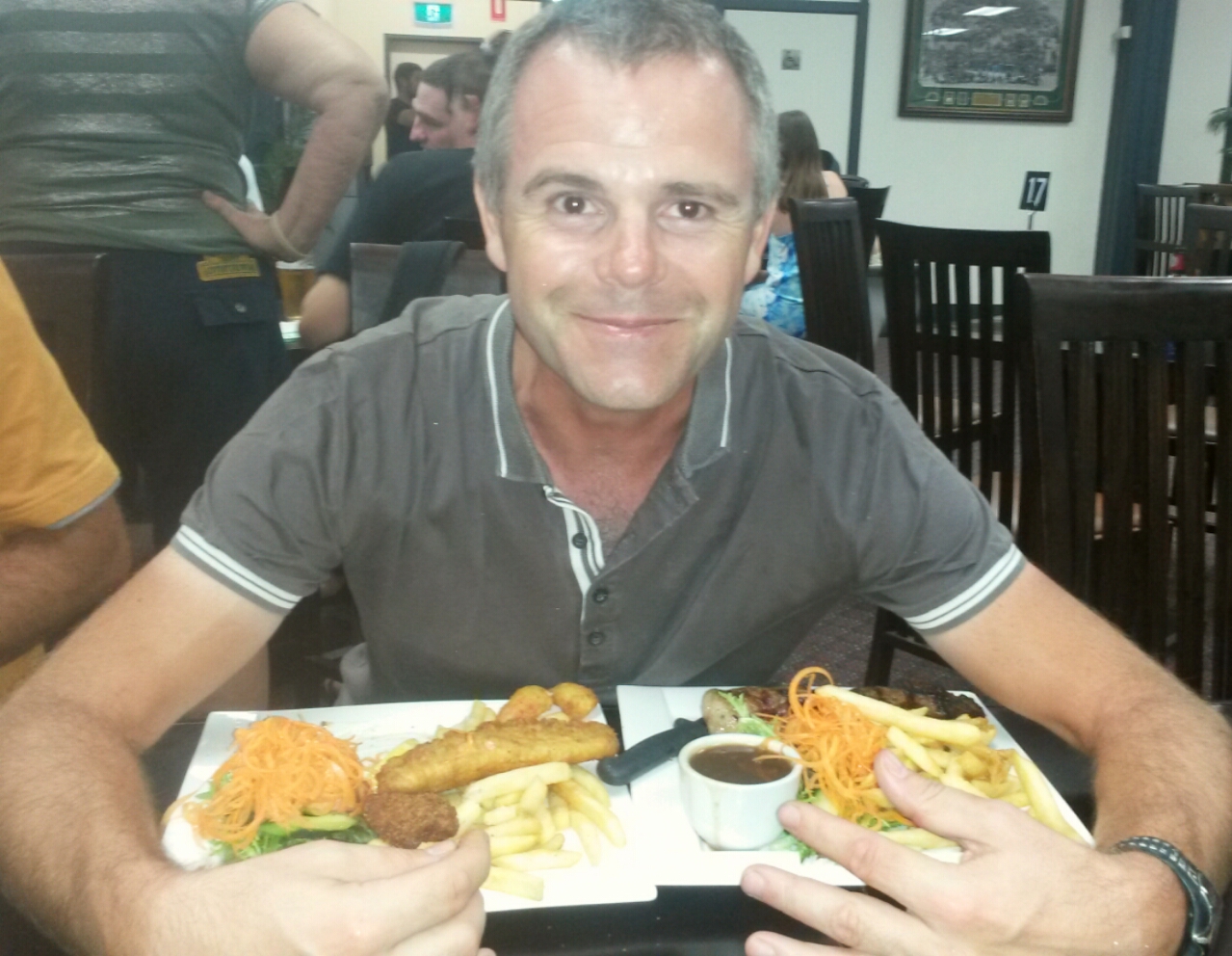 Whereas Gerald has still got nothing, yet. 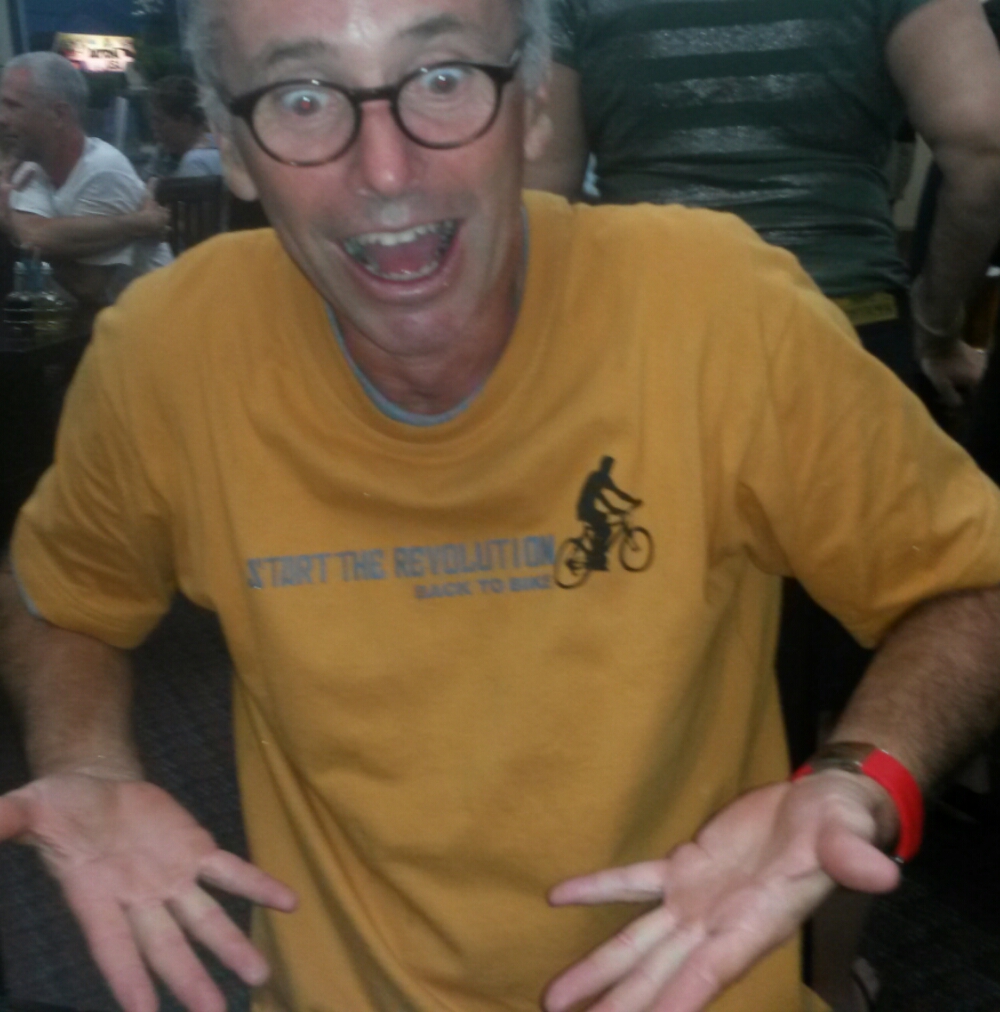 At the Tennant Creek Memorial Club

It is 1pm, the heat is almost unbearable.  I am already 150km into the 160km cycling day. Most of the riders are probably already in camp trying to find the best spot to setup a tent or booking an A/C room. No reason for me to panic and rush down the last 10km. With enough water remaining in the bottles and Camelbak I decided for another 12km detour into the bush land to visit a sacred site of the Warumungu Aboriginal people, named Kunjarra (The Pebbles). A red sand road leads me to a large area of big boulders also known as the ‘Devil’s Pebbles’. 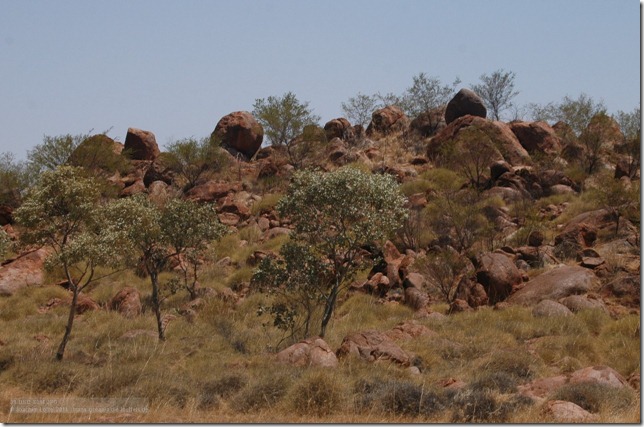 An information board reads: “It is a women’s dreaming site, a sacred place since the beginning of our dreamtime (wirnkarra).” 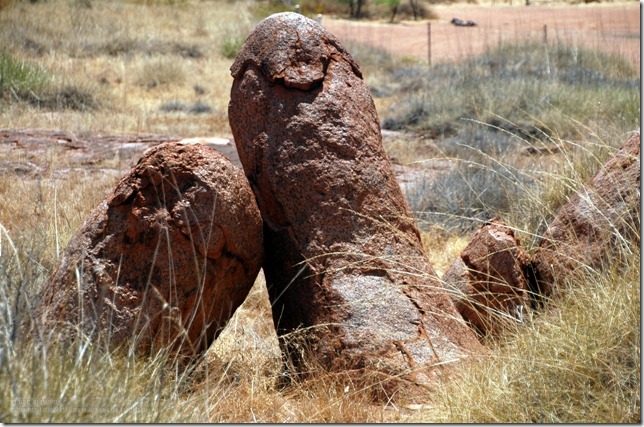 I leave it up to the discretion of the reader to find out what the women may be dreaming of.

I never had such a fast, long solo ride on my mountain bike. I was last out of Renner Springs camp, because I wanted to take a  sunrise photo at camp. Thereafter I went shopping for cold drinks and off I was, at least 15 minutes after the sweep and half an hour after the first rider. No problem at all, I was flying with the wind, average > 30 km/h. A few photo stops in the morning and by the time I reached the first refreshment station at 59km, I was no longer last. The tailwind carried me on to lunch and further towards Tennant Creek. I would have arrived at the new campsite at around 1pm, if I hadn’t decided to deviate from the original route. At 149km a sign indicated a sacred Aboriginal site ‘The Pebbles’ which I read about in my book and wanted to see at the rest day. It was still early in the day, but already in full midday heat. I checked to have enough water left to allow me for a 2 hours detour and exploration of the site. The site was only accessible via a red & dusty sand and gravel road. More then once I almost got stuck in deep sand, however I didn’t want to release air from my tires, as there was still more ride on pavement. I was sure I would be the one and only visitor at this time of the day – and it turned out to be true. No human soul to be seen, no animals, just the plain, hot rocks that form the place along a marked gravel path. After returning from the dusty 13 km detour I continued the original track into town. Campsite was mostly deserted at my arrival, as everyone was already gone to town having cold beers in one of the bars or booked a room somewhere. Tennant Creek hasn’t got a good reputation. My book says: ‘If it makes it into the news, then mostly because of alcoholism or vandalism issues’. It was Halloween night and the pubs were full and scary figures all around. We had dinner in the Memorial Club, which offers a free shuttle between camp and pub. 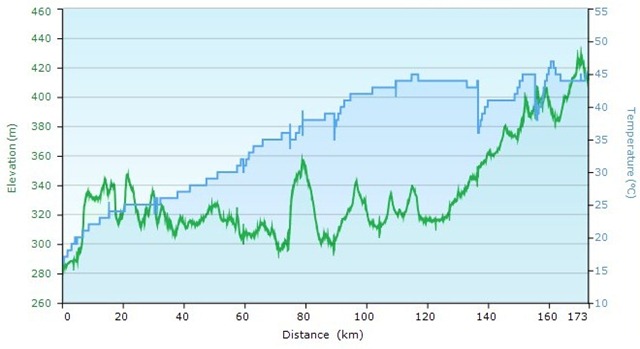 Left my helmet outside for a minute. Now it is full of bugs … 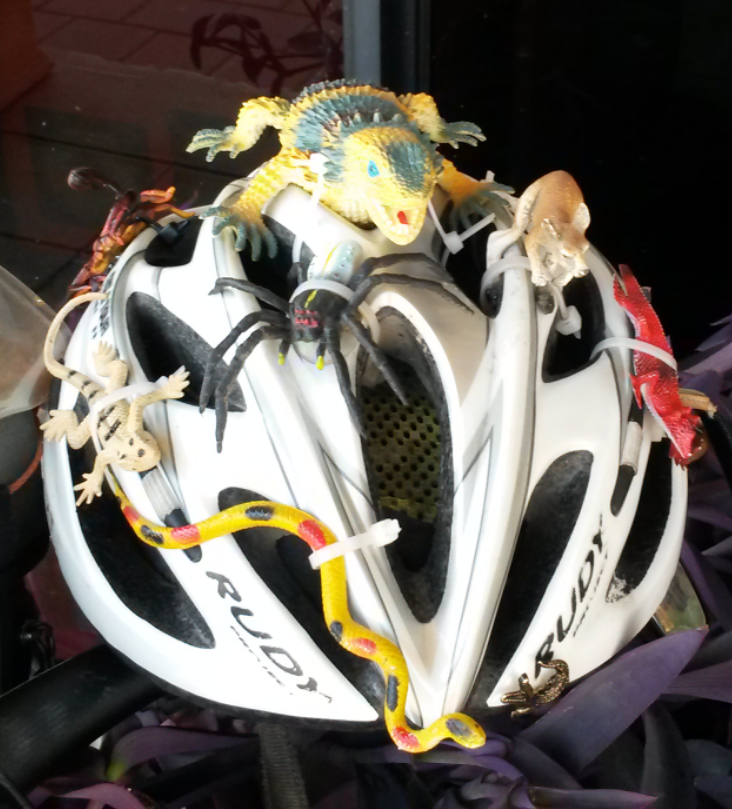 Finally, after 1 day without signal, internet is back to the Outback …

We deserved a shorter cycling day, after the 2 long ones. Cycling was fast and lunch at 70 km reached before 9am. Only 23km more to go after lunch with favorable wind, which blow me into camp at 9:55am. Renner Springs is just a gas station with a caravan park in the ‘desert’, no mobile phone signal, no internet. The camp ground has almost no shade for our tents. So we all escaped from the heat into the bar, restaurant or the pool and did not return until the sun was low enough and the outside air much cooler. The landscape turned into a lower bushes and much flatter. However it still looks very green, although there is no rain – evergreen bushes and perfect tar roads, thus no dust. Tomorrow is another 160 km ride to the next rest day location. 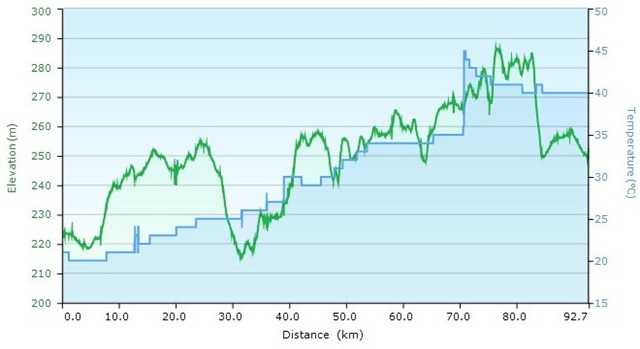 How do you know that the next day is supposingly a short and easy cycling day? 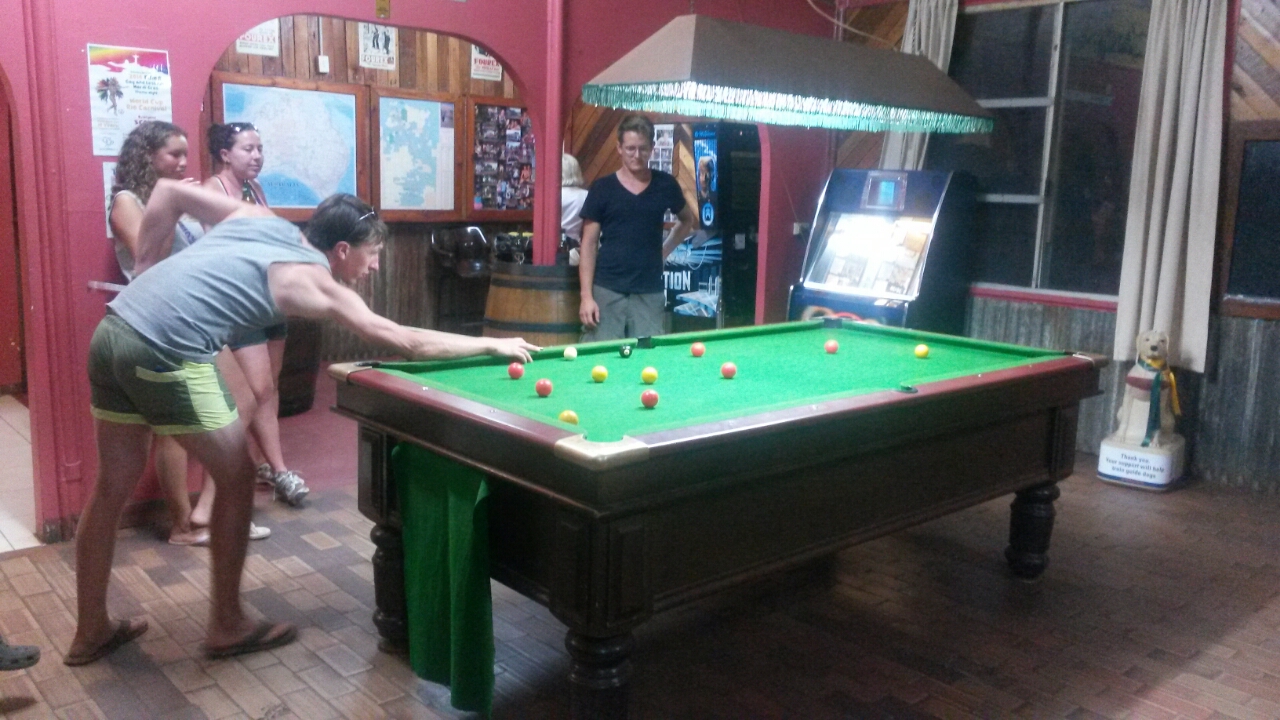 Strategy today: Try to avoid the heat in the afternoon and get into camp as early as possible. Well said, however the first detour was a visit the old airfield at Daly Waters. The hangar and the small museum was not so interesting and very run down. But the ride into the rising sun was worth the little deviation from the original track. The Wallabies were probably not so amused with the early morning intruder.  It took me a while to close up with Henry and Nellie, and  pass them, so I wasn’t last on the road anymore. The coke stop at 52 km was very welcome as the heat was already building up. Lunch at 89 km or shortly thereafter was the end of cycling for most of the riders. The heat was almost unbearable as the vegetation started to change into low bushes, thus there was hardly any shade to find. A rest place at 130 km with water tanks was used to cool down for the final 25km to Elliott. Andreas came with the truck to offer water refills and apples to the remaining riders on the road. The road was turning south-east again, which means directly into the strong headwind. I managed to stay below 6 hours for the 154 km and at 1:30 am I was cooling down in the refreshing camp pool, enjoying a delicious and expensive ice cream.

Dinner was again very delicious. Tofu, with mangos, rice and vegetables in coconut sauce.  Mark is doing an excellent job to prepare vegetarian variations for me, as the only veggie on the tour.

Today I had my first encounter of the so-called ‘Australian No-Brainer’, a subspecies of the ‘No-Brainers’ found in other parts of the so-called civilized world. Whereas the road train and other motor vehicle drivers were really respectful with us cyclists in the past days, this road train driver passed me with the minimum space left, not to crash into me. It was on a long straight road, no other traffic in both directions, and this (I don’t use the proper word here) driver did not even consider to pull over the middle line of the road, but hooted on me and almost knocked me off the road. I don’t know what causes these guys to be so reckless and risk other’s lives, without reason. Obviously, no brain, no way to think about the consequences! Luckily it is a minority who reacts like this, but they manage to spoil the reputation of a wonderful country. 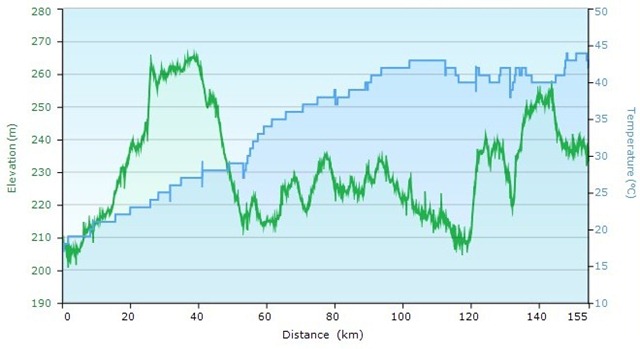 Another long cycling day ahead. Everyone is ready to get on the road, however not without a good breakfast, which is still minutes away … 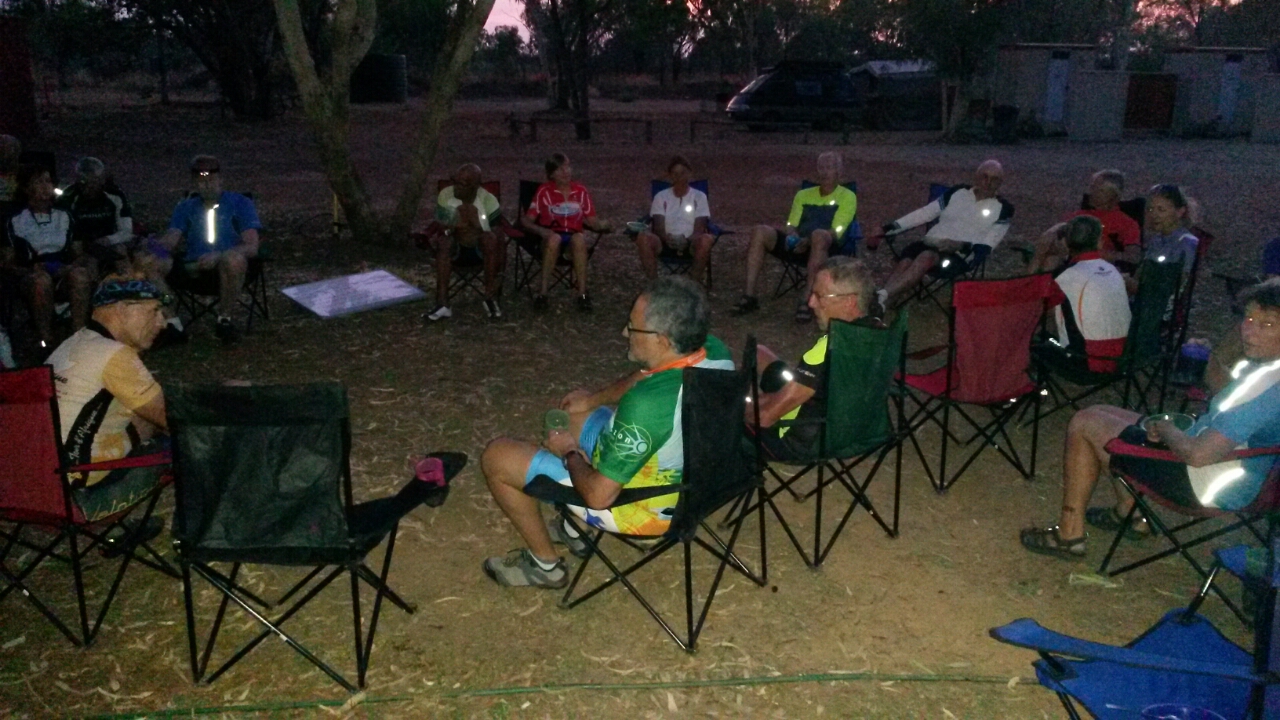 Daily routine:
Breakfast at 5:45am. But first tents were broken down as earky as 3:30am!!! End of the sleep for the rest of us, as the noise of moving zips, folding poles and packing bags runs through the whole camp in the otherwise quiet night.

169 km to go today. Almost impossible to finish it before the midday heat and strong wind sets in. So I decided to ride on my own and go a comfortable pace that allows me to stop here and there and still get into camp early enough to enjoy the pool and bar. The morning was very cool, but the heat turned on during the day. Actually it was the first night, that I had to unroll my sleeping back. There was a first and only Coke Stop at the Larrimah Hotel / Pink Panther Roadhouse 20km before lunch. A real oasis, with a little zoo. 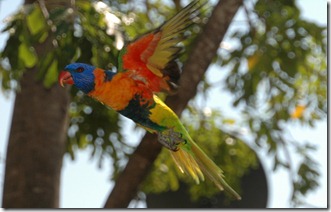 Parrots and other birds in the trees and a tame wallaby. I could have spent more time, but the schedule to finish 169km was tight. Lunch at 95km and a refreshment with apple and iced water at 130km where the only major stops thereafter. The wind was turning into the face for the last 50 km, but I was still able to keep a 25km/h average for the whole day. Today the number of dead wallabies, cows and birds increased. The road side was full of bones and carcasses. Birds of prey in the air and on the road indicated fresh victims. I arrived at 2:30pm in the camp, quickly setup tent and jumped into the refreshing pool. Tomorrow is another long day, 153 km.

There was some confusion with the camp spots we used. I setup min tent next to a power outlet to charge my laptop and gadgets. However, soon after dinner I got a visit from the pub owner, who asked for 14$, if I want to continue to use power for the laptop. I could probably charge it the whole months and not even use energy worth 14$, thus I decided to get of the power line and work on battery. Australia is a very expensive place. They seem to make money with everything, because the have the monopole in these remote locations. Maybe I have better luck to upload more photos in the next campsite, otherwise I have to continue to recharge my equipment in the toilet or laundry, where you can always find power outlets. Not very comfortable, but the only choice … 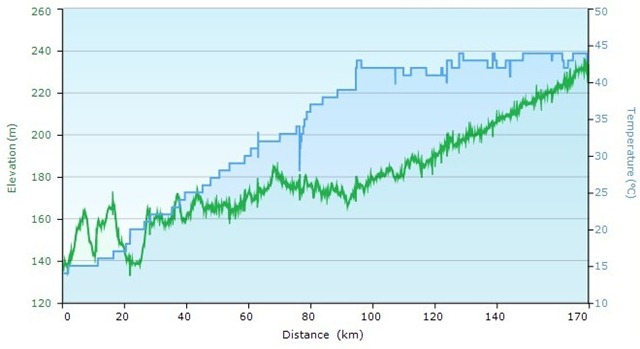 Today I was cruising along after lunch, when I heard a bird above me and a shadow flying by low several times. I turned around and saw the bird above me. It was somehow attracted by my helmet and inspecting the little bug zoo I carry since Darwin. I got my GoPro ready just in time to film the bird’s last attempt to checkout the prey. Thereafter he gave up and rested in a branch. Although I turned around  to give him another chance, he didn’t return again … 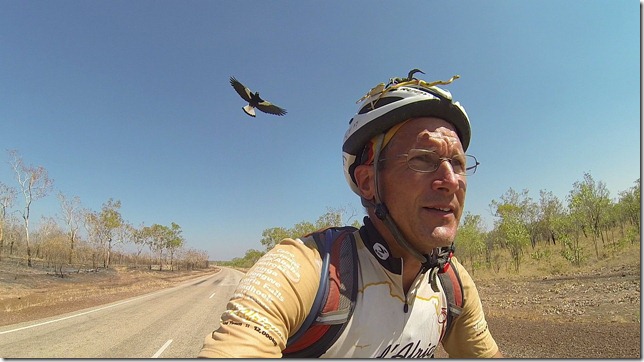