What else could one do on a sunny Sunday morning, having the choice to go to church or ride a bicycle up into a volcano? The final riding day in Java was a long one, but more than worth it. After about 12km we had a choice to cross a rive via a provisional bamboo bridge, or take a short detour on a bad road. No question, I wouldn’t take the bridge option – GoPro & DLR ready to record the passage. Shortly after the bridge I provided first aid to J. who was stung in her finger by a big, unidentified bug. She was quite shocked and in pain and couldn’t continue, thus I called the van for her. Thereafter the first ascend begun.  This first 1400m climb brought me into a fertile crater region built from 4 volcanoes (1 still active). Coffee plantations, green alleys and lovely flowers made the immediate 400m  ‘dive’ into the valley a treat for the eyes. No need to rush for the lunch. It was hot in the valley, but the locals were playing at a volleyball tournament in the coffee plantation. Time, for another 10 minute break, in addition to the many other stops to enjoy the views and take photos. Lunch was nicely setup and lots of treats waiting for us to stock up  energy for the 2nd major climb to the final summit at 1880m. Fairly easy going, as it was not as steep as the ones we had the days before. It was just me and Chelsea who were building the tail of the riding group, which had left long time before. I enjoyed every inch and minute of the day. A view more photo stops during the climb did not slow me down too much, and I was never caught by the sweep. On top of the f 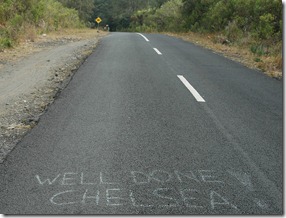 inal summit in Java, I wrote a nice message for Chelsea on the tar. She was ‘TdA sweep’ all day and did a fantastic job to ride this stage with the long climbs. The downhill was kind of difficult to ride. The climate changed on the eastern side of the volcano. The dry vegetation changed into green rain forest, with giant ferns and palm trees. The low clouds or fog made the steep and curvy roads quite slippery. One corner was to fast for me and I slipped off the edge into the green ditch. No worries, only minor scratches on elbow and thigh, recovered my bike from the ditch, cleaned my wounds and continued slower, since my break pads started to give up, after riding for 30 days in the mountains. Road conditions got better the closer I came to sea level. After almost 10 hours since the start I reached the hotel where I immediately cooled down my body in the pool. In the meantime Andreas had already replaced my break pads, to make the breaks fit again for the future descents. 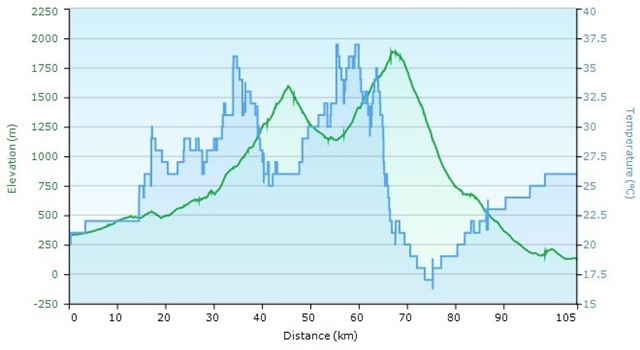