A fast 2000m drop brought us to almost sea level on the first 25km. The ride was very scenic and partially steep and dangerous to ride. Photo stops slowed it down a bit and helped to cool down the breaks. It was a ride through several climate and vegetation zones. The green belt started right around the first corner out of the crater, with all sorts of agriculture; fruits, veggies, wood. Further down the slope of the mountain and in the valley we were still riding through patches of the volcanic ashes that rained down earlier in March this year, when one of the volcanoes erupted in this part of Java. The valley was irrigated by a water system that is fed artificial channels that carried water for the fields, but also for all kind of cleaning: body and motorcycles. Lunch was setup at 78 km at a bridge – or the leftovers of a bridge that existed in March, when the track was scouted. Now there was only a bamboo bridge, wide and strong enough for pedestrians and motorcycles. It was a logistical challenge for the vans to get there from both sides on alternate routes, to provide the catering and continue flagging the continuation of the route. For me it was excellent chance for a ‘Doomsday style extravaganza’ to get to the other side of the river (more later in a different post). After lunch there was a further 200m drop to sea level, with not always favorable wind. Still 70km and 1000m of climbing to go. For the last 40km we turned into a nice tailwind. A new road was built with nice switchbacks in a shady forest to carry us in a comfortable 4-5% grade up the 550m to the first little ‘summit’. Another fast 100m drop and a 180m re-climb before the final drop to Bondowoso. It was still a long day, almost 10 hours elapsed, due to the many photo stops and the extended lunch break at the bamboo bridge. Tomorrow is the last cycling day on Java; and guess what, another huge climbing day, riding into and out of a volcano. We will end only 5km away from the ferry, that will carry us over to Bali, our 3rd island, the next morning. 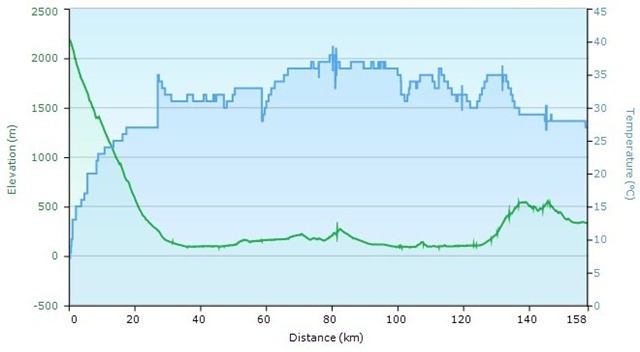