I passed one of the many bridges in 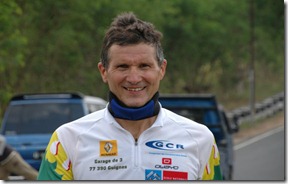 Java and thought to myself ‘Worth a stop or similar to the others?’ I already had stopped earlier on another bridge, where people were busy building a dam in the river, thus I decided to continue, leave the camera in the bag and use the momentum to start into the climb thereafter. However, on the other end of the bridge I recognized some students on the railing and sitting at the banks of the river.  From the edge of my eye I could see, it were all girls and they seem to be doing some training. So I decided to use my  breaks and turn around to have a closer look. An I was not disappointed. Already one girl was fixed to a rope and on 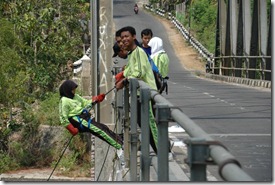 her way over the edge of the bridge. The ‘joy’ was great when the saw me. And soon photos were taken from both sides. All of a sudden the group sitting on the banks under the bridge got loader. They seem to shout something to their  instructors. I should soon learn what they demanded: ‘He must do it, too’! And so I was asked, if I want to try it. What chance do I have other than to say ‘Yes’? Although I was already a bit exhausted, late and not fully free of ‘drugs’ I agreed and soon I found myself in an harness and dangling in the rope. A talented young girl took my camera and made the nice shoots shown below in the gallery. A great experience and a lot of fun for all of us. The unforeseen adventure did not end before I was recorded on many of the student’s smartphones. And so I continued my ride my first ‘Abseiling’ tour, after I Bungee-jumped the Victoria Falls Bridge in Zambia.

One thought on “Over the Edge”